Recently, I was casually chatting with a man.  We were exchanging pleasantries.  We didn’t know each other, aside from a brief 2-3 hour project about a year ago. We had only met virtually for those few hours and never spoke again.

As luck would have it, we ended up at a conference together.  I recognized his name on his name tag, said, “hello,” and reminded him of our brief project.  We ended up talkin for a good while about the conference, our work, families, the world.  At some point, I told him I was a life coach.

Later in the conversation, and unknowingly unprovoked, he told me he had been worried as we chatted that he had said some stupid things.  He thought he had “diarrhea of the mouth.”  That he had talked too much or told too much.  He worried what I was thinking of him.

Judgement is not just those thoughts we have about others.  They are, unfortunately, the thoughts we have about ourselves.  For safety reasons, it may be necessary to size people up.  We need to assess if someone is out to hurt us.  This is simply our primitive brain trying to help us.  So, yes, a certain level of judgment is normal and natural.  Judging yourself, however, is detrimental to your well-being and success.  And, just like judging others for non-safety reasons, judging yourself will become a habit.

I wasn’t thinking anything except that I was enjoying our conversation.  I was thrilled to have met this man in person that I had interacted with virtually, maybe a year ago, on a project.  This all happened by chance!  I was excited to get to know him and to thank him again for working on the project with me.  He was interesting and engaging and totally not surface level like many of the conversations I’d been having the previous 48 hours. I was having a great time talking to him and I was 100% present.

How often are you judging yourself and how is it affecting your life?

Have you ever seen someone you know, but don’t talk to them because you think they don’t like you?

It sounds like you’re passing judgement on this other person, but you are in fact judging yourself!  With no more evidence than your thoughts about how another person acts, you’ve decided you’re not likable, not worthy to talk to, that you’re not being seen!

Unless, this person has declared that they can’t stand you and you should never speak to them, it’s a much safer bet that they’ve not thought about you at all.  And I don’t mean that in a mean way.

I really like the quote that goes something like, “if you knew how little people cared, you’d care a lot less too.”  I’m not exactly sure who said this, but they really sum it up.  Most people are honestly not thinking about you.  They are thinking about themselves.  They are judging themselves.

The nice man I was speaking with had tons of drama in his head and not once did the same thoughts he was having cross my mind.  I was too busy thinking about myself and how much I was enjoying the conversation!

I’m glad that he felt comfortable telling me he was having those thoughts.  It enabled us to have a great conversation about how our self-judgments can wreak havoc on our lives.  Even though he intellectually already knew this, he probably didn’t realize he was actively doing it! 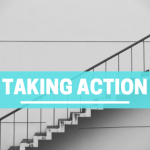